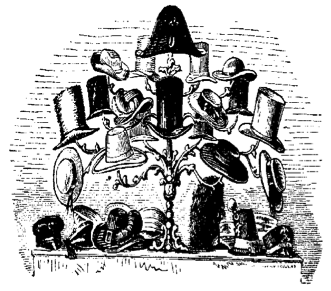 A tale of disaster and fortitude

My mother’s father’s Dutch friend Fred
Always covered up his head
Fast asleep or wide awake,
He wore a hat for its own sake.

But that was only half of it,
To ensure a perfect fit,
Mater’s pater’s mate from Delft
Manufactured them himself.

Not so much a milliner
But someone who could fill an hour,
Aspiring to make head attire
That all who saw it could admire.

Sou’wester, jester, fez and topper
Porkpie, pillbox, peaked and proper,
He cut and stuck and stitched them well
From cloth and felt and brocatelle.

Some of his models have today
Been lost and fallen by the way,
But in their time it must be said
These famous hats went to his head.

Most famous of them all by far
(He sold one to the Russian Tsar),
The formal black Stovepipe Deluxe
Endangered fast low-flying ducks.

His really big success began
When visiting Old Amsterdam,
The Rambling Club requested that
He make a hi-tech hiking hat.

The members didn’t mind the cost.
To stop themselves from getting lost,
They’d pay a fortune so they said,
For navigation on the head.

The consequence of this request
Soon manifested and impressed:
A satin navigation hat,
With arrows pointing front and back. 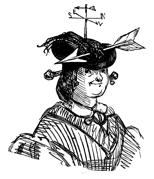 The Sat Nav One, though lots of fun,
Was really rather overdone.
It failed to function from the start
And so Fred had a change of heart.

This misadventure underscored
The first concept was deeply flawed.
He therefore censored Sat Nav Two
And turned instead to something new.

Now it became his life’s intent
A better model to invent.
Engineered from brass and steel,
His next attempt had much appeal.

Encompassing a compass box
With lots of cogs and odd what-knots
Encased in vastly toughened glass,
Designed to last and flabbergast.

A spinning boater with a motor
All intended to promote a
Journey that is well propelled,
He patented ‘The Carousel’.

A clockwork calibrated crown,
Never ever let you down.
It calculated miles between
Where you are and where you’ve been.

Your destination on the brim
Was set before the walk begins.
You lined it up without a rumpus
With the arrows on the compass.

And if you strayed from off the route
A catch unlatched and up would shoot
The automatic safety hatch
A warning “hoot” was then dispatched.

The Carousel sold really well,
Establishing a clientele
Whose true reviews always enthused
Whilst testing it on rendezvous.

However, it did come to pass,
Success was short and didn’t last.
Although reliable at first,
When worn in the thing was cursed.

Very poorly engineered,
Nuts dropped off from bolts that sheared,
.And after several dozen miles,
.Cracks appeared on cogs and dials.

If fully wound up with the key,
It had a dreadful tendency
To crack the driving motor shaft
Which pared the wearer’s head in half.

Wearing it to make a bet
Became a game of hat roulette.
Not so much a gentle ramble,
More a monumental gamble. 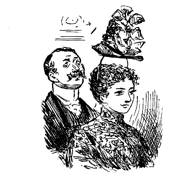 Purchasers complained and scoffed
And like their scalps the sales fell off.
And so young Fred did turn his mind
To hat types of a different kind.

The Rising Dutch Cap sold a bomb
Worn by spinsters with aplomb,
It elevated now and then,
To catch the eyes of passing men.

Some bachelors were quite surprised
To find themselves so mesmerised
Not by lace or pretty face,
But by a bonnet so displaced.

Hats for wearing in the rain
With little spouts to help them drain.
Hats for taking pets to vets,
All helped to offset mounting debts.

Helmets made for added shade
Sold well to the Empire trade.
While smugglers of exotic cats
Could buy a special range of hats. 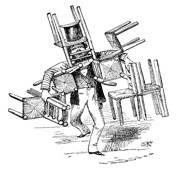 Where meetings need to be controlled,
Votes taken and opinions polled,
And many petty things get moved,
The Chairman’s Hat a must has proved.

Despite scalping several clients,
Fred continued in defiance.
By selling hats that do not kill,
Delft’s hatter is in business still.

Moral
If your hat a head impales,
Leading to a drop in sales,
Don’t give in and be hangdog
Just expand your catalogue.