The Descent Of Man 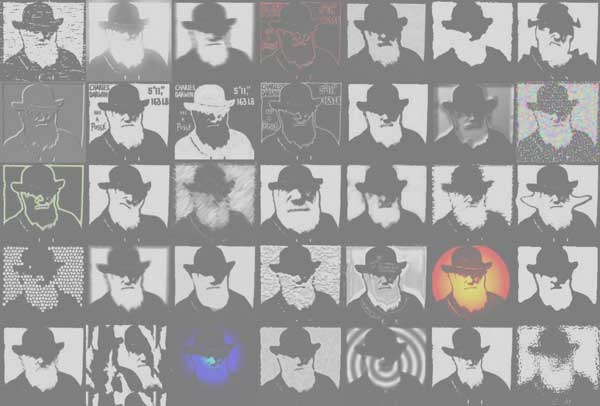 In his ancient family tree, perched high upon a brittle branch,
Charles Darwin had a little hunch that far across the angry sea,
Towards Hispanic territory known to the flighty albatross,
There was a mighty mystery somewhere in Galapagos.
Up there in the canopy, from Cambridge University
A professor of zoology, Sir William Platypus PhD,
Sat with him rather gingerly.

Perched thus the scholars stretched their minds,
Talked of mothers, sons and nieces,
The evolution of Mankind and origin of species.
“The ape is father of the man”, thus it was Darwin began.
He then went on to make the claim that, though it is a crying shame,
And no-one really is to blame – “The weak cannot survive.”
The Doc replied with some surprise and welling tears in both his eyes,
“The tale you’re telling cannot be – it undermines stability”.

With gowned and academic lurch he somersaulted from his perch.
Although the sight was quite appalling, he fell and fell and kept on falling
Until his screams were out of hearing. He hit the ground half disappearing,
Planted where the daisies grow, Do-Do dead – nowhere to go,
Completely cured of vertigo.

Moral
The moral of this tale is clear: high scholarship should be revered
While academic men who sneer when they hear a good idea,
Are doomed to partly disappear.