Donald was a wilful youth
Who hardly ever told the truth.
Confronted he just falsified
By telling even bigger lies.

His patient father in dismay,
Was heard one day to say,
“I hope this is a passing phase,
I can’t believe a word he says.”

The time then came to stop his rants
When wind emerged from Donald’s pants.
This happened to his dad’s surprise
When the boy was telling lies.

The wind was soon accompanied
By awful sounds that trumpeted
A warning loud and very plain:
“The boy is lying yet again!”

With the generation of methane,
His father now did not refrain:
And he became less amiable
As Don became inflammable.

With patience gone he summoned Don
And asked him what was going on,
But then did something to regret:
He lighted up a cigarette.

First the lies and then the thunder,
Finally from way down under
Frightful flames rose and gusted
As Don’s bottom bits combusted.

This might be false, it might be true –
Don told it me as I tell you.
I asked him then how he survived
A childhood built on dreadful lies.

“Now I speak the truth I do,
And I’ve learnt a thing or two:
No longer fearing hot retorts,
I’ve scrapped my fire-resistant shorts.”

No sooner had he said these words
Than rectal turbulence occurred
A dreadful a trouser trumpet call
Shook golfing trophies off the wall.

And that of course was far from all:
What came next as I recall –
An awful light lit up his face
As flames embraced him from the waist.

It gives me pleasure now to say
Not all was blazed away that day.
It is the most amazing fact
His legs still stood there quite intact.

This means that I can now advise
The shorts had worked as advertised. 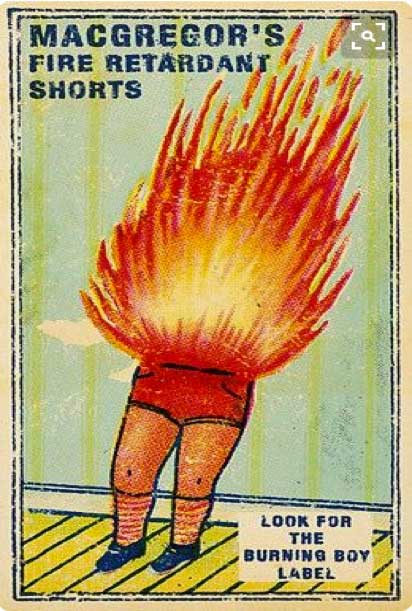