Efficiency is not Enough

The question that is often asked when considering resource management is, ‘Are we getting value-for-money?’ Although this question seems to give a clear focus for the work of financial and asset managers, when put simply and uncritically, it begs the underlying question, ‘What do we mean by value-for-money?’

Over the years, organisations receiving governmental financial support have been required to carry out periodic VFM audits. Although these audits may cover a number of operational features, there has tended to be a strong emphasis on cost cutting. This means that historically there has been a tendency to equate VFM in social housing with the notion of ‘efficiency cuts’. We now need to make two important points.

Fig.3 represents a sequence of linked consequences that flow out of the business operations of a social housing agency. The production of housing and housing services begins with the investment of resources. The investment generates an output that has an impact. The incidence of that impact is distributed in some way (i.e. it has to be paid for e.g. by government subsidy, tenant rents, etc.). The benefits also have a positive impact on specific individuals (e.g. through tenancy and leasehold rights, access to low cost home ownership, the enjoyment of services, etc.). Finally, ‘at the end of the line’ so to speak, the work of the organisation is perceived and judged by all those who use the services that have been generated.

This way of looking at the work of a housing agency leads us to postulate that whether or not it is producing VFM involves considering more than whether it is cutting costs or ‘sweating its assets’. In short – being efficient is not sufficient. To give VFM the organisation needs to demonstrate that it is efficient, effective, fair and is well-judged by those who live in its properties or use its services. 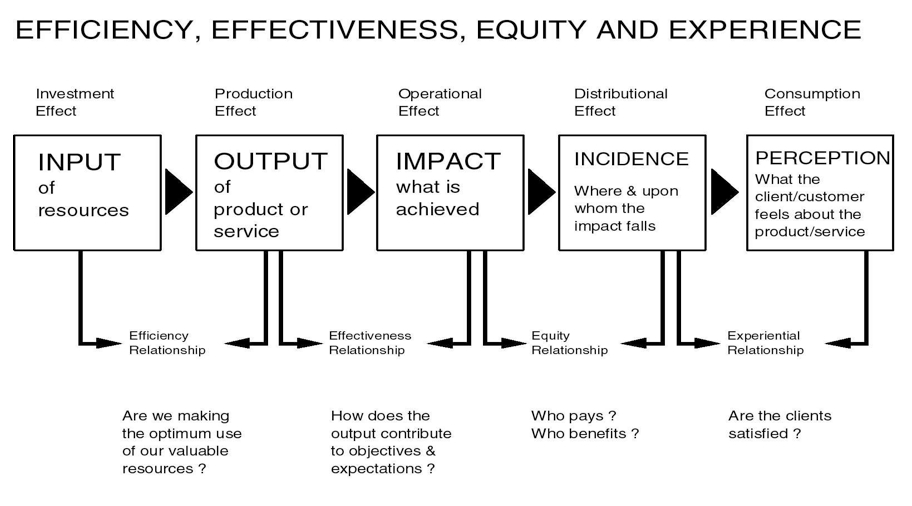 The diagram indicates that efficiency is determined by considering the relationship between inputs and outputs. The idea of efficiency has its roots in engineering where the efficiency of an engine is calculated in terms of how much energy input is needed to generate a unit of power output. Indeed, some contemporary management theorists use the word ‘re-engineering’ when referring to the processes of restructuring corporate arrangements with a view to enhancing an organisation’s efficiency. Like an engine, an organisation is deemed to be operating below its optimum level of efficiency if either it could produce the same output with fewer resources or if, with the same resources, it could produce a greater output. It must be remembered that in the context of providing goods and services, quality as well as quantity is an aspect of output. This means that a better quality service or product would constitute an increase in output just as much as would a service expansion or an increase in the number of units produced.

Given its concern with opportunity costs, economic theory equates output with the results of economic activity (goods and services) and inputs with the factors of production (limited resources). An assumption is made that if, measured in terms of market values, any additional employment of resources (marginal costs) produces a more than proportionate increase in goods and services (marginal benefit), then some improvement in efficiency has taken place. In the public sector the marginal benefit might be seen as some form of social return (e.g. better health, fewer crimes, or more comfortable homes) and the marginal cost is invariably seen as public expenditure.

It is sometimes argued that, in the context of public and welfare services, current debates about the need for greater efficiency have a hidden political dimension. The contention is that as a justifying notion, ‘efficiency’ is intellectually sympathetic to free-enterprise market attitudes and many of those who are calling for “more efficiency” in the running of public services are seeking to ally themselves with the core values of the private sector. In this way the notion of ‘efficiency’ has been used to impose business management and budgetary arrangements on public sector and other welfare agencies. The concerns here are twofold. Firstly, when welfare organisations are reformed with ‘efficiency savings’ in mind, this occurs in a managed rather than a free-enterprise market, and when detached from the discipline of real market forces, the application of business management ideas can become procedural and unresponsive. A managed market is insulated from the warning bells of falling profits and other market signals that exist under proper free enterprise arrangements and, as a result, there is a danger that, swept forward on an unconstrained wave of management ideology, the reforms may go too far. The second concern is that efficiency criteria tend to measure success in a relatively short-term time frame, giving undue weight to current cost savings and under-valuing longer-term effectiveness.

Concerns like those mentioned above mean that the achievement of VFM involves more than making an efficient use of scarce resources. Most organisations are concerned to assess the output against its impact as well as against the quantity of resources used up in its production. The effectiveness of an output is assessed in terms of how well it contributes to the key objectives and expectations of those with some interest in the organisation’s operations.

Increasingly effectiveness criteria are prescribed by society in the form of explicit expectations, regulations, laws and externally imposed performance targets. In the case of permanent organisations (e.g. local authorities and housing associations) that utilise durable assets, effective performance has to be put into some time profile. We need to assess the future consequences as well as the current outcomes of putting money into housing and related services.

Any consideration of effectiveness is likely to bring to the fore questions of equity (distributional justice). In cases where public money or the public interest is involved there is likely to be a particular concern about the distribution of costs and benefits that result from an employment of resources. Most major decisions made by social housing agencies have to be demonstrably fair as well as effective and efficient.

Economic and financial decisions change situations – they have an ‘impact’. As a result, some people are made better off and some people are made worse off. The positive and negative outcomes of such decisions (marginal social costs and benefits) are distributed differentially to different interest groups. So when we change things by spending money we should be clear about who is going to gain and who is going to pay or in some other way lose out.

Assessing the impact of financial decisions again brings up questions of time and inter-generational justice. Costs and benefits associated with housing decisions often come on stream at different times so it is possible for one generation of tenants or occupiers to enjoy or pay for the spending decisions made at some other time. This can be illustrated by reference to the issue of paying for major repairs. If future repairs are paid for by means of a sinking fund, then the burden will fall on current rent payers. If, on the other hand, they are paid for by a loan taken out at the time of the works, then future loan charges will displace the cost burden onto the rents and charges of future tenants.

There is an old Swiss proverb that says, “Don’t ask the doctor, ask the patient”. We should never lose sight of the fact that consumption is the ultimate purpose of all economic activity. What the customer or client feels about the service or product is of prime importance. In the free-enterprise sector of the economy, market forces operate to reward those firms whose output is in demand and commercially punish those whose products are not in demand. In recent years public sector and other welfare organisations have made a conscious effort to monitor user satisfaction and feed the results into their policy-making processes. The argument here is that if users are unsatisfied there must be doubts about whether the organisation is achieving value-for-money. In recent years a number of sophisticated but easy-to-use computer packages have been developed to help social landlords collect, organise and evaluate tenant priorities.

In discussing value-for-money, some commentators make reference to the need for ‘economy’. In so doing, they are referring to the act of acquiring resources and are making the point that raw materials and other factors of production should be bought as cheaply as possible so long as they are commensurate with minimum specifications. As economy is concerned with the price of inputs, it is more sensible to treat it as an aspect of ‘efficiency’ than as a separate category.

By arguing that the notion of value-for-money embraces more than just ‘efficiency’ we are saying that it is a multiple rationality concept. Because of the tendency for politicians, regulators, auditors and administrators to equate VFM simply with ‘efficiency’, some commentators substitute the term “best value” for “value-for-money”.[1]